0 out of 5 based on 0 customer ratings

Categories: Home of Phidgets in the USA, Motor Controllers

The 1032_0B Phidget LED-64 Advanced allows you to independently control 64 Light Emitting Diodes. Each LED can have the current limit set individually, and the brightness controlled from 0 to 100% within that limit using current control. These LED outputs can also be used to interface other devices that benefit from current control (such as buzzers, fans, and other small, simple electronics).

Note: The 1032_0B Phidget LED-64 Advanced is identical to the 1032_0, except that you have the option of whether you want to include the USB and LED cables.

Most standard LEDs have forward voltages below 2.75 Volts, and can be used with the LED by simply soldering them to a connector-wire and inserting the wire into any PhidgetLED board output. The forward voltage will default to 2.75V, and the maximum current defaults to 20mA. 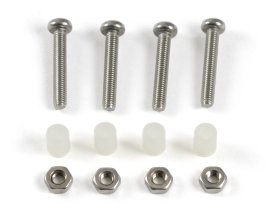